Walking is one of our great joys in Normandy. In London, the city buzzes around us all the time.  Cars speed up and down our street of terraced Victorian houses, while overhead planes cruise towards Heathrow from dawn into the night. We walk in the city too, but mainly to get somewhere, and in a hurry. It’s a luxury to set off on foot without any particular agenda.

A national park footpath starts just beyond the end of the garden and runs east for a few kilometers along the Seine to Aizier. It’s a great walk for the children, flat, and lined with blackberry bushes, and with neat stepping stones across a vigorous stream. The path ends at a large picnic ground, from where you can turn right into the attractive village of Aizier. 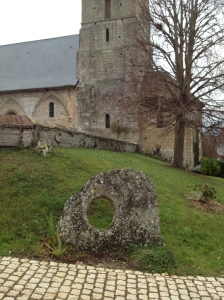 Aizier’s Romanesque church dates from the 11th century. Even older is a mysterious stone with a large round hole in it. Discovered in the 1870s, it is thought to be 4000 years old, and marked the position of a neolithic burial ground.

Around the church there is a short historical walk with archived photographs of the village.

Look at all those people – the policeman, the deliveryman, the baker, the schoolchildren – squinting smartly into the sun in front of the general store. You’d be hard pressed to round up anyone in sleepy Aizier today.

From here, return to Vieux-Port either back along the river or along the road. Better, extend the walk by taking the small road up the hill towards the recently excavated Chapelle Saint-Thomas.