The significance of November 1st may be all but forgotten, little more than a hangover after the revelry of Halloween, in many places. But in France–where Halloween is observed as a holiday only for children—it’s Le Toussaint, All Saints Day on November 1st, that is widely marked. As one blogger explains, it’s a holiday when everyone goes home to be with their family and remember their loved ones who have died.

So it felt just right to mark 1st November this year with a family meal. We were joined by friends we’d not seen much in recent years, since they moved away from our London neighbourhood back to Paris with their four children. To mark the occasion I made Susan Loomis’s hearty lamb stew from her memoir-cookbook about moving to Normandy, On Rue Tatin: The Simple Pleasures of Life in a Small French Town, followed by David Lebovitz’s ever reliable Chocolate Mousse I from The Sweet Life in Paris: Delicious Adventures in the World’s Most Glorious–And Perplexing–City.

Something dreadful happened in the village this year. I’m not ready to write about it yet, may never be. It gave some peace and much-needed pleasure to prepare and then eat together at the cheerful looking table; to take a postpandrial walk in the woods together; to share with friends the downs and ups of busy lives in our different cities. It was indeed a day to remember, as well as to celebrate the lives we have.

In La Haye-de-Routot, in Upper Normandy, is a collection of heritage museums exploring aspects of Norman and French culture: traditional bread making (which I have written about here), the history of clogs, the linen house, and La Chaumière aux orties, a celebration of all things nettle. That’s right: l’ortie piquante, the common and much hated stinging nettle.

I am a city girl, and nettles, like cow dung, are annoyances, to be got past quickly, ideally gotten rid of. I only remember one sort of nettle celebration in my childhood.  At the boys’ boarding school my brother attended in the South Downs in the late 1970s, there was a field of nettles, thigh-high. The small boys would run through the nettles, their bare, white legs sticking out under grey flannel shorts. It was a badge of honour, to show no pain.

In fact, the nettle has long been celebrated for its many good qualities: as a medicinal herb, a nutritious food, and as fibrous material used in canvas and rope. The nettle is rich in vitamins, iron and protein. It is known for its re-vitalizing qualities and is used both as a tea plant and as a vegetable.

On some Sundays at La Chaumière aux orties there are cooking demonstrations. We were lucky enough to visit on a damp August afternoon. Shivering in our thin summer clothes, we were delighted to find a huge open hearth, a pot bubbling away, and a delicious smelling spread of food on a table: beignets, crumbles, cups of warm soup, a pie.

A chef was giving a demonstration of open hearth cooking and handing out recipes. She invited us to taste. Of course we accepted. It was only as the food was going into our mouths – including the mouths of our young daughters – that I noticed the basket of nettles on the hearth, and the pictures of nettles on the wall. I asked my husband what an ortie was. Too late.

And just as well, because the recipes were delicious. The soup, the beignets, the crumble and the pie: all wonderful, and not a hint of sting. Even our daughters went back for more. 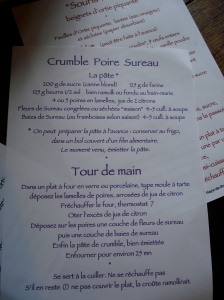 I took copies of the recipes with the best intentions. But I’m having a hard time reconciling the hated nettle with that delicious food. Maybe soon I’ll get over it, put on my gloves, and go nettle collecting. There’s a forest of nettles along the side of the path at the end of our garden, just waiting for me.